Book Review: The System of Professions – An Essay on the Division of Expert Labor 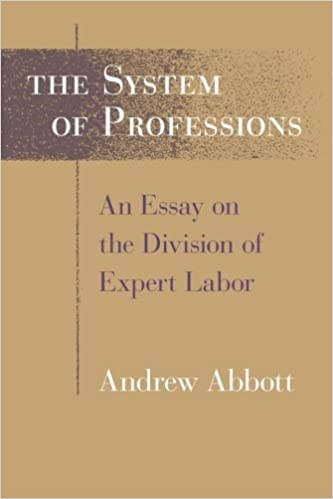 This book was written in 1988 by Andrew Abbott, who served as Distinguished Service Professor of the Department of Sociology and the College at the University of Chicago. The author explores central questions about the role of professions in modern life: Why should there be occupational groups controlling expert knowledge? Where and why did groups such as law and medicine achieve their power? Will professionalism spread throughout the occupational world? While most inquiries in this field studied one profession at a time when the book was published, Abbott here considered the system of professions as a whole. Through comparative and historical study of the professions in the nineteenth- and twentieth-century England, France, and America, Abbott builds a general theory of how and why professions evolve.

The movement from an individualistic to a systematic view of professions organizes this book. The twenty main takeaways I got out of it are presented below:

‘Why Professionalism?’ is a deep question that the author also tackles throughout the book. We have professionalism, in the first place, because our market-based occupational structure favors employment based on personally held resources, whether of knowledge or of wealth. Such employment is more secure, more autonomous, and usually more remunerative, partly because it is organized in ‘careers’, a strategy invented in the nineteenth century to permit a coherent individual life within a shifting marketplace. We have professionalism, secondly, because nearly all kinds of knowledge are organizable as common resources for a body of individuals. We have professionalism, third, because competing forms of institutionalization have not yet overwhelmed it. It may seem odd to argue that professionalism itself competes with alternate forms of structuring expertise, in particular, with commodification and organization. But this competition arises in part because the commodities embodying expertise require development, maintenance and support that increasingly exceed the resources of individual professionals.